1st floor of the museum

In 2022, 200 years have passed since the publication of Adam Mickiewicz's collection "Ballads and romances", published as part of the first volume of "Poetry".
Therefore, the Sejm of the Republic of Poland decided to establish the Year of Polish Romanticism.
The Sejm resolution reads: “The memory of Polish Romanticism is the memory of the most important signs defining national identity. The year 2022 marks the 200th birthday of this era, and this is a good reason to recall the spiritual deposit that Romantic heroes, artists and thinkers left us." The text also emphasizes that without the works of leading Polish Romantics, "we would not be who we are today."
The celebration of the Year of Polish Romanticism prompted us to take a new look at the cultural achievements of the Romantic era. Can romanticism inspire, is it understood?
This is how the exhibition was created under the title: "... when inspiration said "I know" and knowledge said "I believe" The Year of Polish Romanticism"
We show 38 exhibits in four showcases. Stopping at each of them, visitors can see e.g. handkerchief by Adam Mickiewicz, the first edition of "Pan Tadeusz", a manuscript by Teofil Lenartowicz, manuscripts and graphics by Cyprian Kamil Norwid, sketches and letters by Józef Ignacy Kraszewski, a sketch by Jan Matejko, as well as 19th-century editions of works by Juliusz Słowacki, Zygmunt Krasiński, and Antoni Malczewski.
The exhibition is intended to remind who the Romantic hero was, where Romantic artists drew inspiration from, to answer the question whether the poet had a "rule of souls" and what about our sense of nationality.
The exhibition will also be open to visitors in 2023. 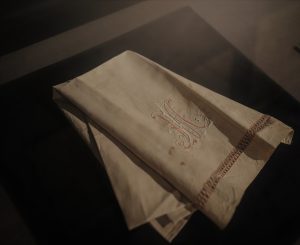 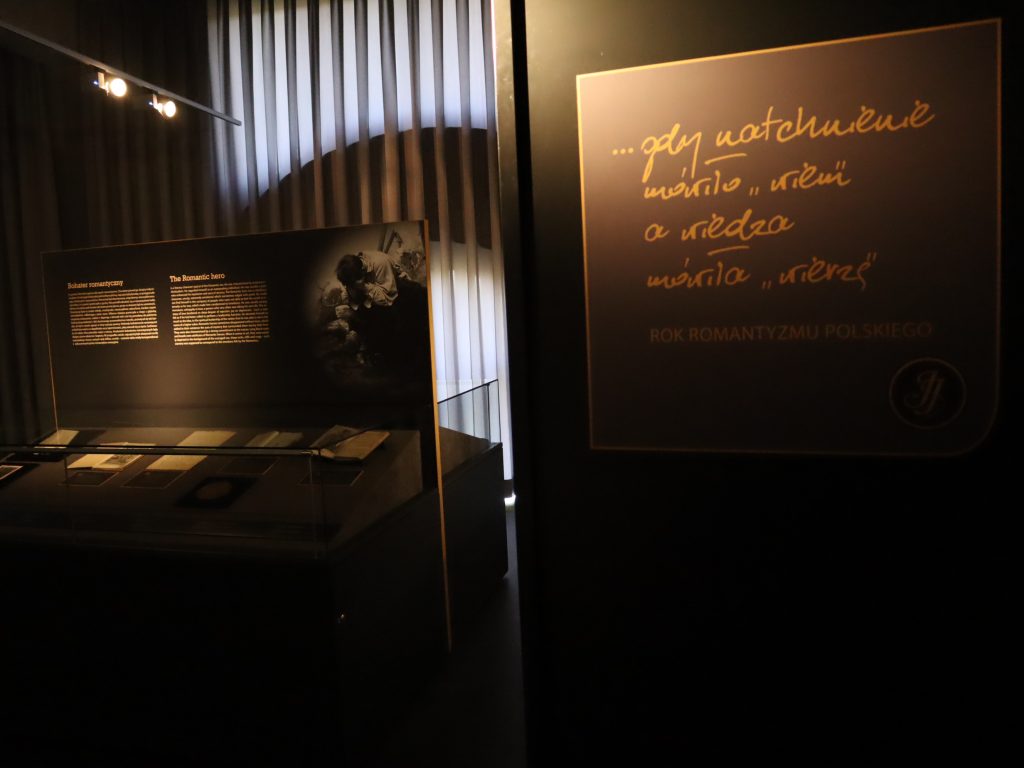 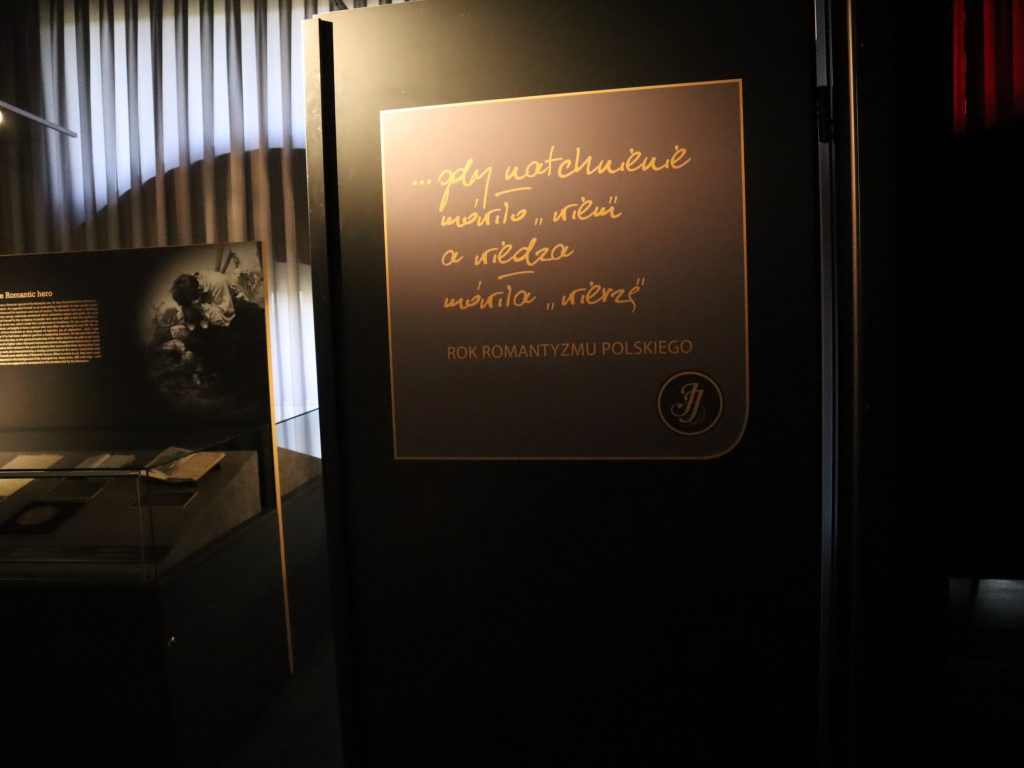 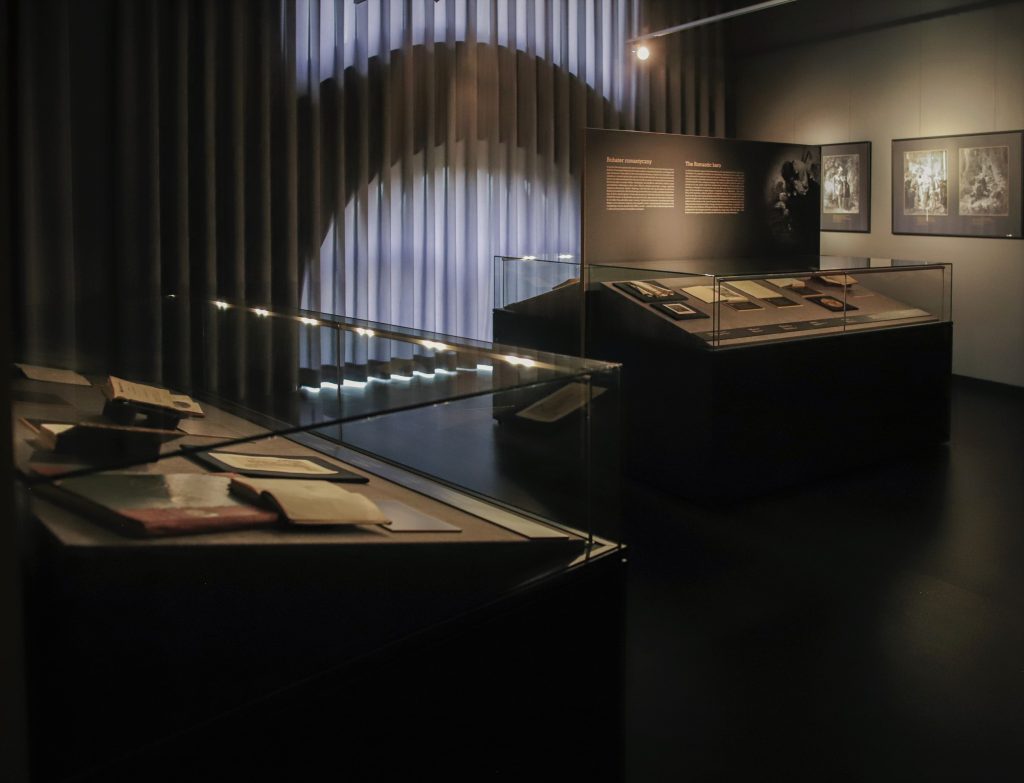 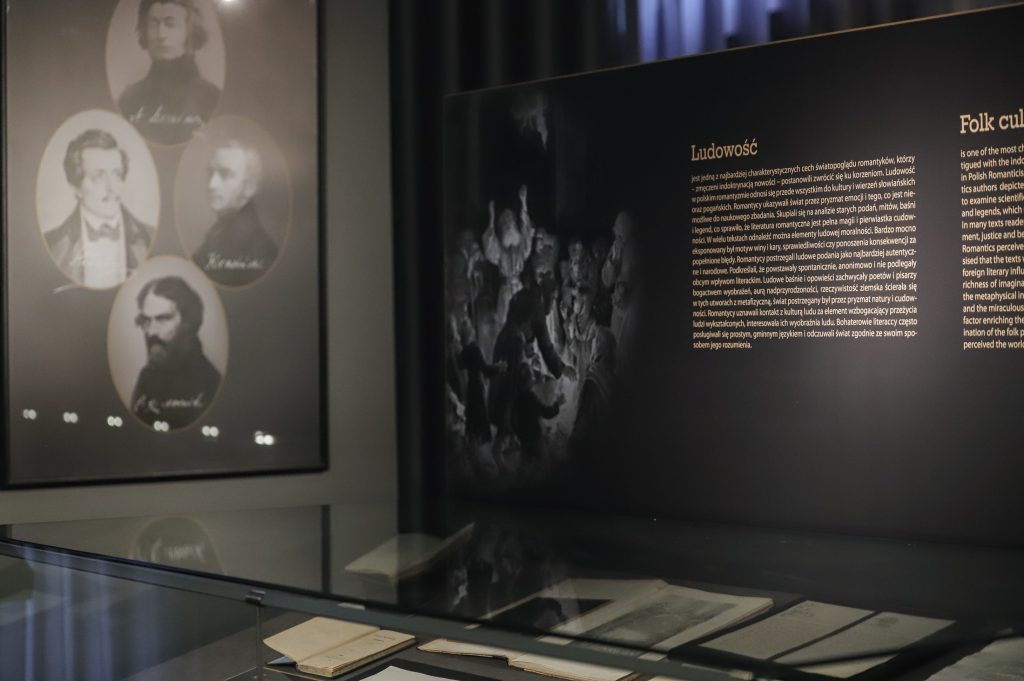 Poland's Wedding to the Sea 2020” (opened in 2020). The exhibition refers to the events from 100 years ago, when General Józef Haller made a symbolic wedding to the sea. Presented here are a priceless souvenir - a wedding ring with the sea. The general received two such wedding rings, one he threw into the sea as a sign of marriage, the other he had on his hand. In this room, we also recall the history of Pomerania's return to the borders of the Republic of Poland. The exhibition was open to visitors until 2021. 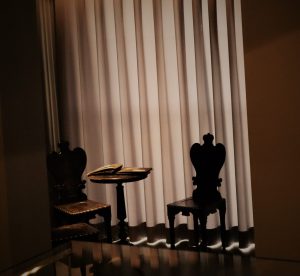 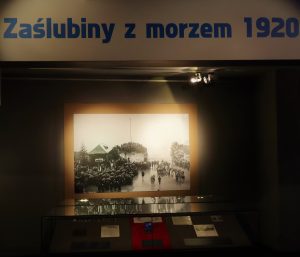 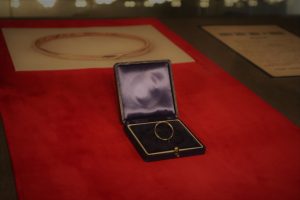 HALL OF SACRED ART - In 2020, we opened the exhibition "With Mary through the ages" in this room. We present here the most important iconographic types of Marian representations. You will see here: oil paintings on canvas, icons, images of Mary on pharmacy vases, the depiction of Mary as a baby in a cradle or the image of Mary on Agnusk set in a Mexican reliquary. The exhibition also presents the settings of field altars from the Second World War. 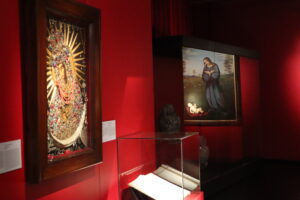 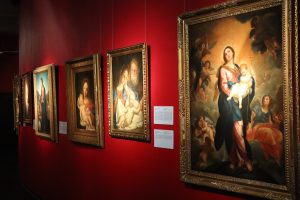 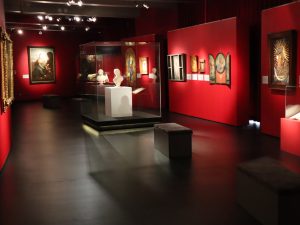 In 2021, in this room we placed Marian representations made in various graphic techniques: woodcuts, copperplate engravings, etchings, lithographs. It complements the exhibition with Mary through the ages from the previous room. Here you can see, among others color lithography according to the painting of the Van Eyck brothers Annunciation of the Blessed Virgin Maryor copperplate engraving Assumption of the Blessed Virgin Mary Lucas Vorstermans (junior) after a painting by Anthony Van Dyck as well as contemporary images of Our Lady of Lichen. 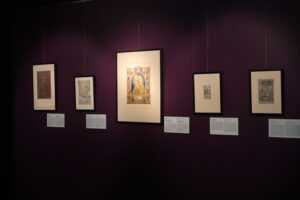 NOTHING TO ADD, NOTHING TO TAKE: RUBENS, REMBRANDT (EXHIBITION OPEN IN 2019)

The exhibition includes graphics by both masters from our collections. Engravings from Rubens' studio are very numerous in our collection, from the Rembrandt school, and we have over a dozen prints. In the art of Northern Europe there are no more famous and contrasting different artists like the two great Baroque masters: Flemish Peter Paul Rubens (1577-1640) and Dutch Rembrandt Harmenszoon van Rijn (1606-1669). They were both painters, they lived in the Netherlands and worked under the influence of Italian painters. However, their art reflected divergent beliefs: on the one hand Rubens the philosophy of the Catholic Counter-Reformation, on the other Rembrandt Protestant Reformation. Rubens and Rembrandt appreciated the graphics. And although they understood it so differently, and used it in different ways, they both made their mark on its history. Following these differences is an interesting and inspiring trip to the Netherlands of the Golden Age. We still have catalogs for this exhibition on sale. 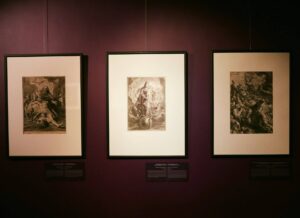 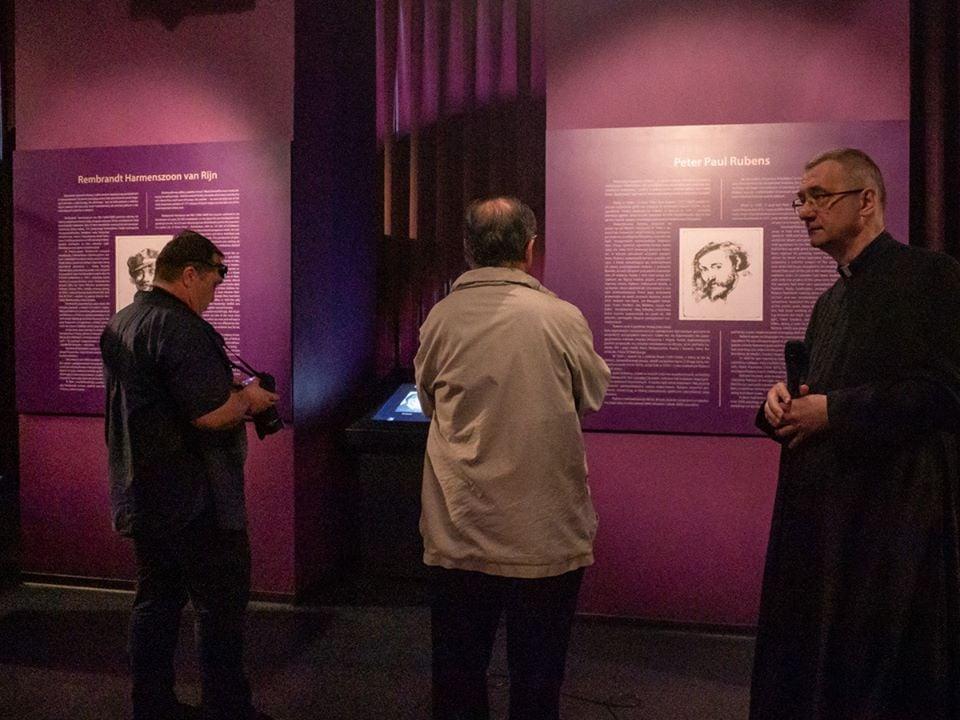 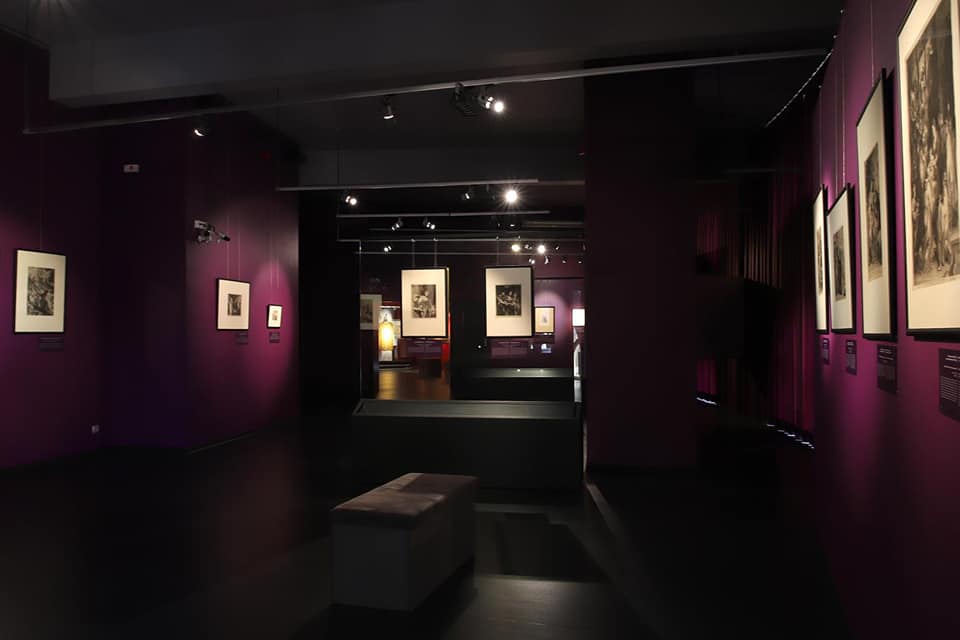 The exhibition was to help find answers to the questions: "Can a nation exist without a homeland?" and "Why the persecution by the partitioning powers did not destroy the Polish spirit in our ancestors". It was divided into sections in which we presented various ways of fighting Russification or Germanization: the activity of Poles in exile, education, care for the memory of national heroes through women who guard the Polish tradition and watch over the education of young generations in the spirit of patriotism. 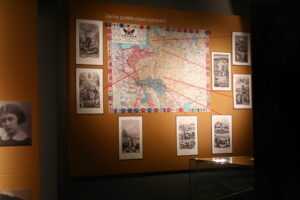 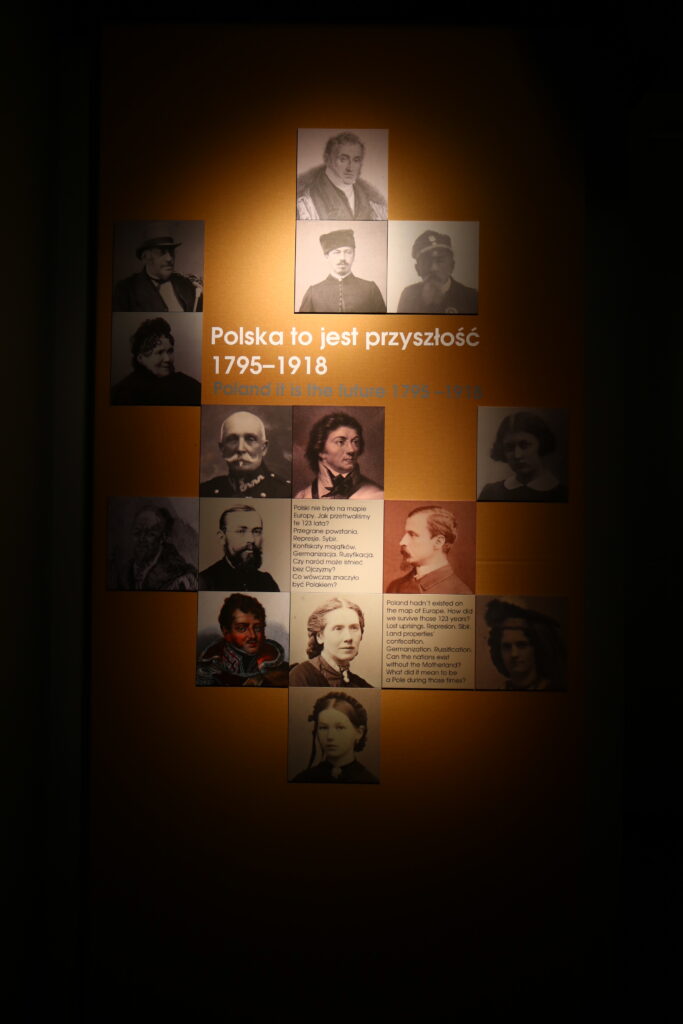 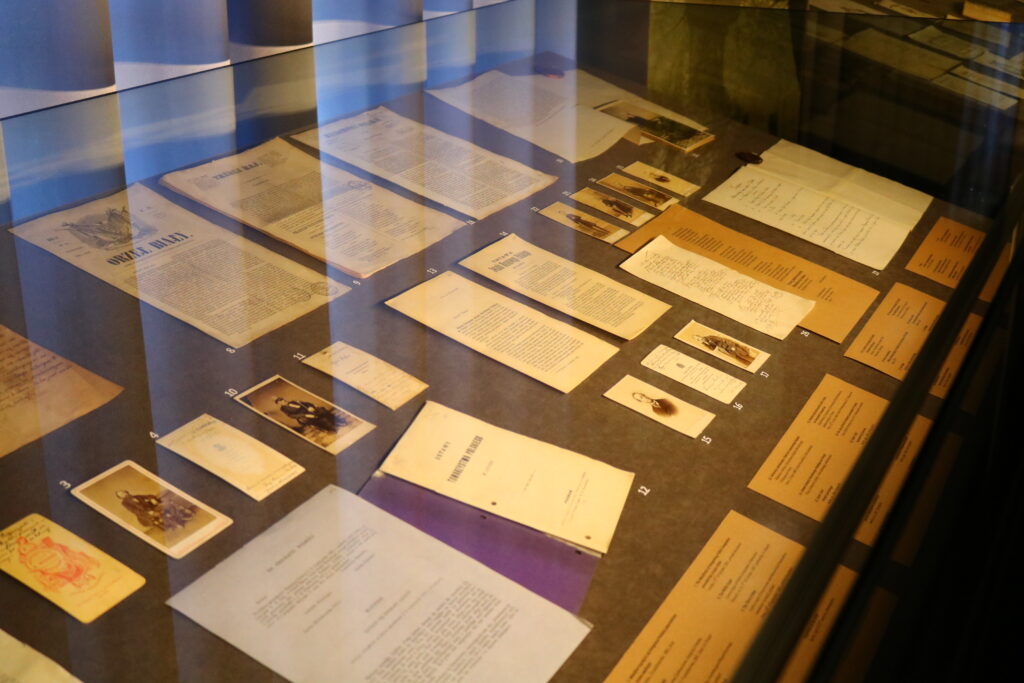 The title of the exhibition was borrowed from the book by the patron and creator of the Museum - Fr. Józef Jarzębowski - "People of 1863 speak".

The exhibition was organized on the 150th anniversary of the January Uprising. It was planned in such a way as to lead the viewer along two parallel and complementary paths.
The first is the path of private experiences of people who participated in the uprising. Thirteen heroes were selected here. Thanks to the photographs from the museum's collection, the viewer could see what they looked like, and then thanks to the remaining souvenirs: manuscripts, diaries, testimonies, letters, documents, they could learn about their fate and experiences from the time of the January Uprising. All these manuscripts were read by museum employees and, thanks to the help of people living and working in Licheń, selected fragments were read and recorded. If the viewer became interested in any of the characters, he could read who he was and listen to the content of the souvenirs preserved after him.
The second is a walk along a path composed of official Polish and Russian documents, newspapers issued at that time, court judgments, official invitations, leaflets calling for participation in demonstrations, a response from the National Government, etc. The presented documents were consciously selected from among many others. 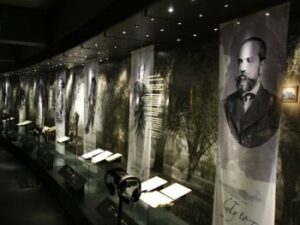 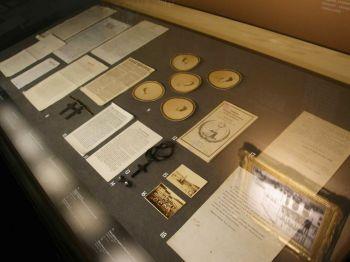 Who was General Józef Haller? The exhibition "Forgotten General" was to answer this question.
Here you could see memorabilia belonging to General Haller, incl. Order of the White Eagle and Virtuti Militari, general's uniform, wedding ring between Poland and the Baltic Sea, private correspondence, relics of many saints, Holy Bible, prayer book, rosary, watch, fountain pen and pencil, tie clips and cuff links. Out of this collection of personal items, the image of General Józef Haller emerged not only as a brave soldier, but also as a caring husband and father, a Pole who was very religious and dedicated to the service of his homeland. The story of the Blue General was completed with a multimedia presentation and the General's words about the Blue Army, Poland's wedding to the Baltic Sea and the years of World War II. Archival recordings were made available by Radio Free Europe.

The exhibition "How beautiful Poland must be ..." is a story about the dramatic fate of Poles during World War II seen through the eyes of teenage boys.
The exhibition contained a lot of educational elements about the fate of Poles deported by the Soviets in 1940-41 deep into the USSR. On the prepared boards there was information, incl. about what the deportations were and who affected them, and how, thanks to the uprising of the Anders' Army and the evacuation of the army in 1942, the fate of a handful of survivors happened. This small group included third-class A students who ended their wandering in England in England.
On May 1, 2009, the exhibition was officially opened by Bishop Antoni Dydycz, Ordinarius of Drohiczyn. Together with him, the bishops from Poland and Lithuania, who at that time held their working meeting in Licheń, and the Superior of the Polish Marian Province, Fr. Paweł Naumowicz.
The exhibition was on view in the basilica until October 30, 2009. 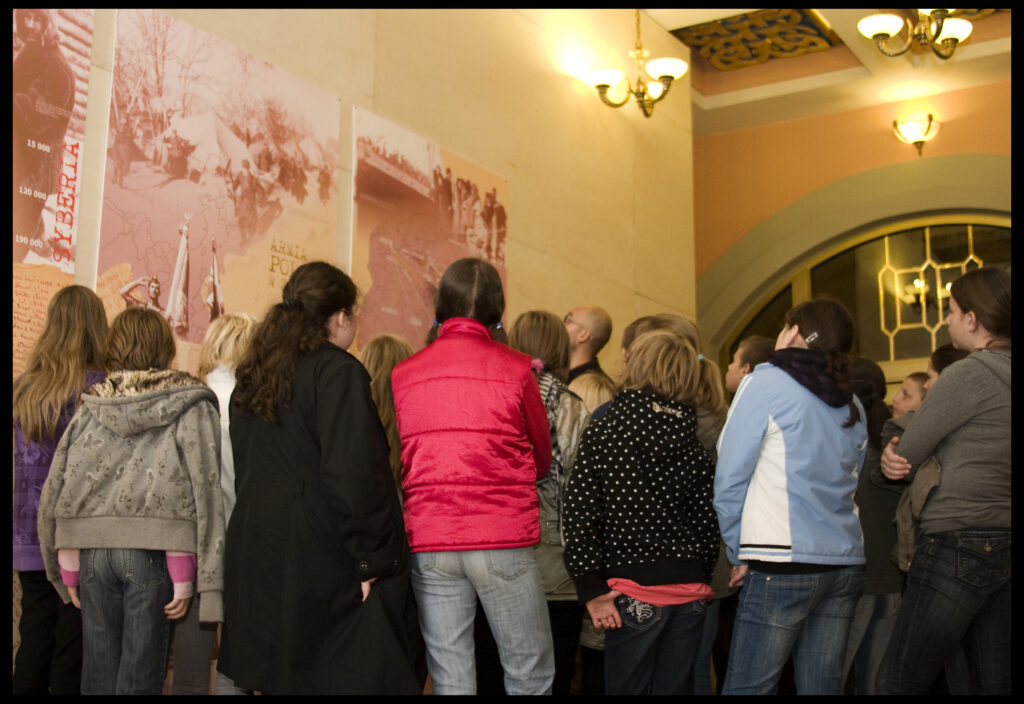 BEFORE THE MUSEUM IS ESTABLISHED ...

On July 2, 2008, the Indulgence of the Blessed Virgin Mary of Licheń in the lower basilica of the Sanctuary in Licheń, an exhibition entitled "Before the museum is established ..." was opened. The exhibition announced the opening in the Licheń temple of the museum of Polonica gathered over 80 years by the Marian Fathers.

Three copies of more than 400-year-old Bibles were prepared for the opening day. They were: the first edition of the first Polish translation of the Old and New Testaments, the so-called Leopolita's Bible (Kraków, Mikołaj and Stanisław Szarfenberger, 1560-1561) decorated with 284 woodcuts, published by the reform camp by Mikołaj Radziwiłł, Calvinist Bible, the so-called Brest Bible also called The Radziwiłł Bible (Brześć Litewski, Drukarnia Radziwiłłowska, 1563) and the first edition of the Bible translated by Jakub Wujek, printed by Primate Stanisław Karnkowski (Kraków, Drukarnia Łazarzowa, 1599).

Apart from the Bible, the exhibition featured, among others: Romuald Traugutt's personal items - his glasses, diary, prayer book, mementoes of General J. Haller - uniform, portrait; memorabilia of the Siberians - an altar made of tin cans, a jar with soil and a pine cone from the Katyn forest, and things left by Fr. Józef Jarzębowski, a Marian, creator of the Marian collection.